The Romans had two main daily meals, but they often added a breakfast of bread soaked in wine, grapes, olives, milk and eggs. The midday meal was a light affair of cold dishes.

Dinner was the main meal: a feast of hors d’oeuvres (mixed seafood) followed by game, pork, veal, goat, fowl and, especially, fish and finally sweets with a honey base, fresh and dried fruit.

These courses were accompanied by sweet, scented wines, as well as often having interludes for entertainment.

Cuisine had thus become a refined pleasure and, for some, a show of wealth and originality, as in the famous banquets of Lucullu and Trimalchio.

Unfortunately for the modern cook quantities of ingredients were not given in recipes until about the 17th century. All I can suggest is use your skills as a cook!

Fresh French Beans and cooked Chickpeas are served with salt, cumin, oil and a little wine

Boil the ham with about 1/2-lb of dried figs and 3 bay leaves. Remove the skin and make criss-cross incisions, which you fill with honey. Next make a paste of flour and oil (1lb flour and enough oil to make a manageable pastry). Roll out the pastry and cover the ham. Bake in the oven, remove the pastry when it is cooked and serve the ham as it is. or

Patina of Sole with herb sauce

Beat and clean the soles and place them in a shallow pan. Add oil, liquamen (a very strong fish stock, with anchovies – try anchovy essence) and wine. While the fish is cooking pound pepper, lovage, oregano, ground well, pour on some of the fish stock, add raw eggs and work into a smooth mixture. Pour over the soles and cook over a low fire. When the mixture has set sprinkle with pepper and serve.

Boiled baby marrow and carrots with a cumin sauce Serve the carrots raw with salt, oil and vinegar. Boil the marrows, then fry and arrange in a shallow pan. Pour over the cumin sauce with a little wine added. Bring to the boil and serve.

Cumin Sauce – Pound together, pepper, cumin and a little rue, blend with liquamen and vinegar. Add a little defrutum (substitute reduced grapefruit juice) to give colour. Bring it to the boil three times. 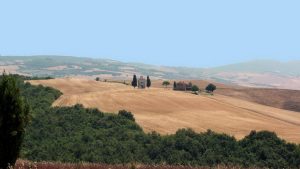 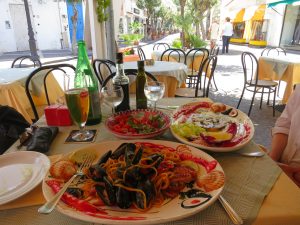 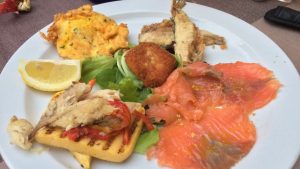